However, Python is not limited to just statistical tools. Python is also used by many companies for a host of reasons including Yahoo, Dropbox,  Google, NASA, IBM, and Mozilla.

One secret to Pythons popular is its flexibility. When using Python it is possible to employ several different coding styles. Below is just some of them.

You can mix these styles together to make powerful applications.

You can download Python by searching for “Anaconda Python” in Google. The Anaconda version of Python downloads several additional features to besides Python including the Spyder IDE which is what we will use here.

Once you download and install Anaconda, on your computer you need to search for the program called “SPyder”. When you open it you will see the following. 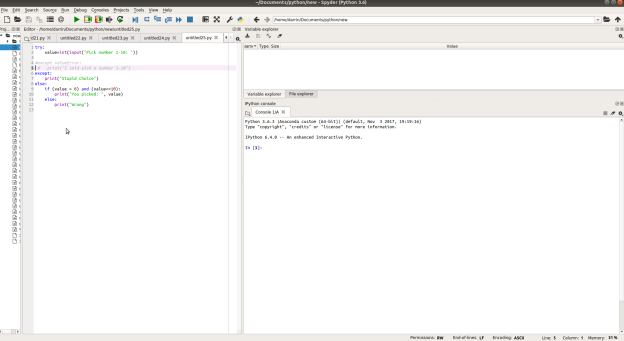 Here is what each pane represents.

When writing code remember that you can save it long term in the text editor or just execute it quickly in  the console,

We will now run our first line of code. Followed by the output in the IPython Console. Below is what we typed into the Console

Here is what it looks like in the console

Here is what we did.

Of course, there is much more to Python then this. However, this serves as an introduction for a future post.

Python is a popular programming language used in a variety of application. The source of its popularity has to do with it general-purpose philosophy. There’s a little bit of something for everybody in this language which encourages its use. Using the Spyder IDE will allow you to experience Python for the purpose of acquiring new skills.