variables that must be solved. With each problem, we will use the direct translation to set up the problem so that it can be solved.

Direct translation involves reading a problem and translating it into a system of equations. In order to do this, you must consider the following steps

Below is an example  followed by a step-by-step breakdown

The sum of two numbers is zero. One number is 18 less than the other. Find the numbers.

Step 1: We want to know what the two numbers are

The answer is m = 9 and n = -9. If you add these together they would come to zero and meet the criteria for the problem.

Below is a second example involving a decision for salary options.

Step 1: We want to know when the salaries are equal based on sales 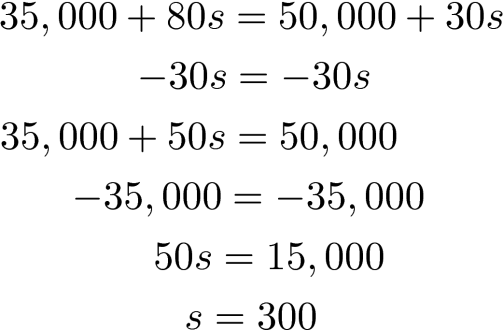 You can check to see if this answer is correct yourself. In order for the two salaries to equal each other Dan would need to sale 300 units. After 300 units option B is more lucrative. Deciding which salary option to take would probably depend on how many sales Dan expects to make in a year.

Algebraic concepts can move beyond theoretical ideas and rearrange numbers to practical applications. This post showed how even something as obscure as a system of equations can actually be used to make financial decisions.